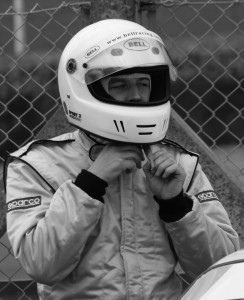 A married father to 2 young boys and a long suffering wife Suzanne, Gary has been a Motorsport enthusiast ever since his dad gave him a model of a Lotus 72 JPS F1 racing car when he was just 2 years old. Right from an early age it was Gary’s dream to race, but coming from a humble background this was always a challenge as budgets were tight. Gary competed in many club level karting events in his teens and early 20’s, securing a couple of southern championships and proving he was a winner behind the wheel, but working as a Porsche mechanic was never going to get him into the saloon car racing he craved.

A move in his mid-twenties from car mechanics to computer repairs was the change he needed. Within 5 years Gary was running the networking side of Beckenham Business Systems, a small IT company in Beckenham, South East London. With this role, Gary networked with many people, including the Motorsport fraternity and managed to secure sponsorship for a season in the Lodge Sports Porsche Championship in 2005. Competing in his first ever season in saloon cars, Gary won his last race of the year and was awarded the rookie of the season award. He then went on to win the overall championship in 2006, along with getting married in the same year.

Racing in saloons ever since, Gary has enjoyed much success and was crowned 2012 Production Touring Car champion in his Seat Leon Cupra.

Gary’s goal for 2017 is to win the Porsche Club Championship.

Hobbies –Scuba diving, ski-ing and snowboarding, tennis and playing racing games. Gary also loves films and as he works in the audio/video industry he is constantly playing with home cinema setup.

With over 15 years of karting and now in my 12th year of saloon car racing, with two club championships under my belt, I am ready to move on to bigger things. I am running with EJM Preparation, who bring a wealth of knowledge and experience with them from previous seasons along with BTCC and WTCC expertise, so I think we are well placed to be challenging for the championship this season. My sponsors are keen for me to deliver results and expressed interest in high profile GT Endurance racing if we have a successful 2017 campaign, so we will be pushing hard to do well.